Conference of Michael Czerny on the “Laudato Si'” encyclical

As part of its JPIC (Justice, Peace and Integrity of Creation) activities in Quebec, the CRC organized, on September 28, a public lecture around Pope Francis’ encyclical letter “Laudato Si'”. The CRC was pleased to invite Father Michael Czerny, SJ, a member of the Pontifical Council for Justice and Peace to give this lecture. More than 80 people came to hear Father Czerny speak on environmental issues.

After putting into context the encyclical letter and the assessments which led Pope Francis to make the World more aware of the care for Creation, Fr. Czerny gave some useful insights for reading, understanding and living the encyclical. “Dialogue on the care for Creation is fundamental, a dialogue that takes into account all the different perspectives” he said. Also, contemplation can help us change the way we consider the Creation. Earth is part of us and not just an object that provides us unlimited resources.

Several members of local and national organizations including the Diocese of Montreal, Green Churches Network, and Centre Justice et Foi were present in the auditorium of the Institut de pastorale des Dominicains. They were able to take part in the conference by sharing with the Assembly on they have accomplished so far to care for Creation.

Michael Czerny has also insisted on the essential role played by public and political authorities in Environment protection. Benefiting from a little coverage in media, signatories to The Paris Agreement on climate will gather together in Marrakech (Morocco) from November 7 to 18. This international gathering will be aimed at achieving the priorities of The Paris Agreement, especially related to adaptation, transparency, technology transfer, mitigation, capacity building and loss and damages. 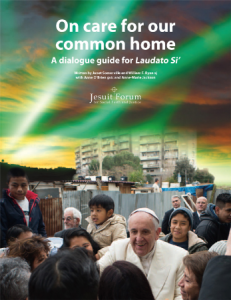 In line with the theme of the conference, attendees have been invited to the launching of the Dialogue guide for Laudato Si’ (produced by the Jesuit Forum for Social Faith and Justice) which will be held next October 18 at the Maison Bellarmin (25, Jarry West Street) in Montreal from 4 p.m. to 6 p.m. 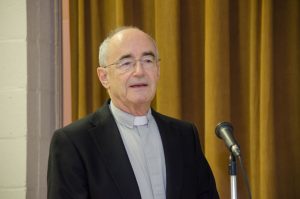 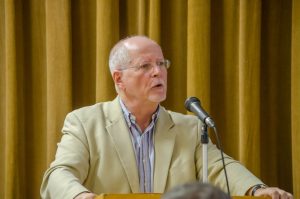 To see more pictures of the conference, click here.

Videos displayed during the conference (in French only) 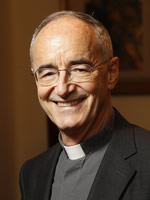 Michael Czerny, S.J., is a Canadian Jesuit who has worked with various Jesuit social justice initiatives for over thirty years. Czerny first served as the founding director of the Jesuit Centre for Social Faith and Justice in Toronto from 1979 to 1989, then as director of the Human Rights Institute at the University of Central America (UCA) in El Salvador. From 1992 to 2002, Czerny served as the Secretary for Social Justice at the Jesuit Curia, and subsequently served as the founding director-coordinator of the African Jesuit Aids Network (AJAN) until 2010. Since 2009 has been an adjutor to the African Bishops Conference and Synod, as well as (since 2010) as advisor to Cardinal Peter Turkson, President of the Pontifical Council for Justice and Peace.